B00, (SOUND) Get ready for some Halloween Fun. Go Slow!
Translate
Barbados Coat of Arms

Barbados West Indies 1812. Just inside the entrance to its cemetery is an open vault. Is there Ghosts in Barbados Barbados West Indies 1812 In the coastal fishing port of Oistins on the island of Barbados is Christ Church Parish Church. Just inside the entrance to its cemetery is an open vault belonging to a wealthy family who have not placed their dead within its walls for the better part of one hundred and eighty two years, ever since some macabre events in the early nineteenth century. The parish of Christ Church is one of eleven historic political divisions of Barbados. It has a land area of 57 km2 (22 sq mi) and is found at the southern end of the island. Christ Church has survived by name as one of the original six parishes created in 1629. After it and the courtyard were destroyed by flood in 1669, the main parish church moved to Oistins area, becoming the main town and former capital of the parish. 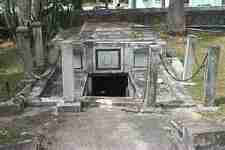 In the cemetery grounds of Christ Church Parish Church a wealthy sugar plantation family, the Waldrons, had a vault constructed for their future dead. Built from blocks of coral and carved from the limestone bedrock the vault sits half above and half below ground just inside the entrance to the graveyard and measures twelve feet by six and a half feet. Not much is known about the early history of the vault except that a tombstone lay on the site reading: 'James Elliot, Esq. - Died May 14th 1724'. Certainly there were no coffins within the vault at the turn of the century.1807 July 31st. The first coffin, a wooden one, to be placed within the empty vault in the nineteenth century was that of Mrs. Thomasina Goddard. She was a relative of the Chase family, plantation owners on Barbados. After her interment the vault was sealed by a huge marble slab. Shortly after the burial Colonel Thomas Chase acquired the ownership of the vault. Chase was reputed to have been a cruel master to his many slaves.

1808 February 22nd. One of Thomas Chase's daughters, Mary Anna Maria, died at the age of two. She was placed inside a lead coffin and interred within the vault at Christ Church alongside Thomasina Goddard. Once again the pallbearers sealed it with the marble slab. 1812 July 6th That summer another of Chase's daughters died. Mary's elder sister, Dorcas Chase, was rumored to have starved herself to death under the domineering parental authority of her father. The funerary party positioned her lead coffin beside the other two and sealed the vault.

1812 August 9th. Thomas Chase himself died that year. His coffin was a wooden one inside an outer casing of lead and was so heavy that it required eight men to carry it through the churchyard. When the pallbearers entered the vault, they noticed a disturbance of the three coffins within - it was hard to miss. In fact Mary's was upside down in the opposite corner from where it had been set. Puzzled and believing grave robbers to be responsible for the desecration they repositioned the coffins and added Colonel Chase beside them with Mary's coffin on top of the others.

A mile north of Oistins. 1816 April - St. Philip's Cemetery, Barbados. Samuel Brewster, a relation of the Chase family, was buried in the cemetery at St.Philip's church. He had been killed during a slave uprising.

1816 September 25th. At the age of eleven months a relative of the Chase family, Samuel Brewster Ames (sic), died and was brought to the vault in Oistins for burial. Expecting nothing unusual the funeral procession opened the marble slab door and found that the four coffins inside had been disturbed again. It is unclear in exactly which positions those coffins were found.

In fact the slaves avoided the cemetery of Christ Church Parish because they feared that 'duppies' were at work there. Duppu is said to be malevolent spirits. Duppy is a word of Caribbean origin meaning ghost or spirits. Caribbean folklore revolves around duppy. Duppy are generally regarded as manifestation (in human or animal form) of the soul of a dead person, or a malevolent supernatural being. They are said to mostly come out and haunt people at night, and people from around the islands claim to have seen them. The "Rolling Calf", "Three footed horse", and "Old Higue" are examples of the more malicious spirits. A disturbance of the two coffins (disruption of the vault) already in the vault upon the burial of Dorcas Chase has been included in some versions of this case, but there is no real evidence to support this account. Made with help from The Mammoth Encyclopedia Of Unsolved Mysteries by Colin Wilson & Damon Wilson
SHARE Thank You Please Bookmark Us!