The hunger inside given to me, makes me what I am
Always it is calling me, for the blood of man
They say I cannot be this, I am jaded, hiding from the day.
I can't bare, I cannot tame the hunger in me...

...So instead you'll taste my pain.
The hunger inside given to me, makes me feel alive.
Always out stalking prey, in the dark I hide.
Feeling, falling, hating, feel like I am fading, hating life. -----Redeemer - Marilyn Manson-----
From "The Queen of the Damned Sountrack" Vampires are undead beings that often visit loved ones. Vampires are creatures of the night that are believed to live off of human blood. Vampires can smell blood on Halloween Fun Scare. The vampire expresses the darker side of life better, and with more ?lan than any other creature. It is possessed of style, power, and sexuality. When it comes to alternative lifestyles, nothing can match the vampire. Usually vampires ae snobbish and control freaks and keep werewolves as pets. Sometime they cause deaths in the neighbor hoods they inhabit. So be sure to finish looking though this site before you leave as not to bring any home. Vampires date back to the early 18th century. Then they caused hysteria. 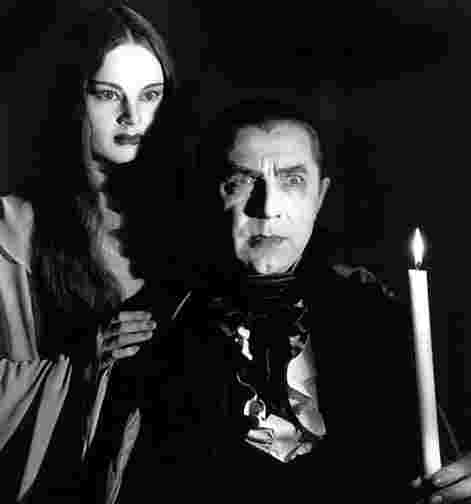 Bram Stoker's 1897 novel Dracula which is remembered as the quintessential vampire novel and provided the basis of the modern vampire legend. The success of this book spawned a distinctive vampire genre, still popular in the 21st century, for his numerous supernatural novels and short stories. With books, films, and television shows. The vampire has since become a dominant figure in the horror genre. His passion for theater led him to write reviews as a theater critic for the Dublin Evening Mail. After marrying and moving to London, Stoker became a manager for the Lyceum Theatre, owned by his friend, Sir Henry Irving. Stoker wrote novels and stories in his spare time in order to supplement his income. In the early 1920's, plays transformed Stoker's vampire from an unsavory character with bad breath into a suave and sexy creature in a black formal suit and cape. Bela Lugosi refined this image with the addition of his exotic Hungarian accent, good looks, and almost hypnotic stare. His name became almost synonymous with that of Count Dracula. Then in 1976, Anne Rice wrote "Interview with the Vampire". Her book took the vampire into new territory it had never entered before. Prior to Anne Rice, almost all vampire stories were told from the viewpoint of the humans who encountered and had to defeat the vampire. The vampire was usually a two dimensional evil character that no one could really identify with. Suddenly Anne Rice's book changed all that. The vampires, not the humans, were the central characters. The vampires' loves and hates, hopes and fears, were a larger than life, darker than life, reflection of the human condition. Reading "Interview with the Vampire" is like eating a deluxe dark chocolate dessert so full of calories they are practically crawling off the plate. In other words, perfect for the Gothic scene. The vampire protagonist of Rice's second book "The Vampire Lestat" is the vampire's vampire. He is stylish, powerful, sexy, and lives not one but two, alternative lifestyles: bloodsucker and rock. ....
Draculas Guest (Opens in new window)

I have been bitten by a Vampire in this Crepy Mansion. If you haven't been bitten yet, you can ask, what's it like to be kissed by a vampire?

Unexpectedly a bat flies off from the ceiling. Looking up, you see that a number of them are dangling there. The bat transforms into a vampire, before your very eyes and stands staring at you.

What do you get when you cross Dracula with Sleeping Beauty? - Tired blood! What do you call a ghosts' mistake? - A boo-boo. Where does Dracula usually eat his lunch? - At the casketeria. Where does Dracula water ski? - Lake Erie. Why couldn't Dracula's wife get any sleep? - Because of his coffin.
Why doesn't anybody like Dracula? - Because he has a bat temper. What do ghosts and goblins drink on Halloween? - Ghoul-aid.
What do ghosts serve for dessert? - I scream.
What do ghosts put on top of an ice cream sundae? - Whipped scream.
What kind of tie does a ghost wear to a formal? - A boo-tie.

It is unclear why Bram Stoker chose this fifteenth century Romanian prince as the model for his fictional vampire. Stoker was friends with a Hungarian professor from Buda-Pest and many have suggested that Dracula's name might have been mentioned by this friend. Regardless of how the name came to Stoker's attention the cruel history of the Impaler would have readily loaned itself to Stoker's purposes. The events of Dracula's life were played out in a region of the world that was still basically medieval even in Stoker's time. The Balkans had only recently shaken off the Turkish yoke when Stoker started working on his novel and the superstitions of the Dark Ages were still prevalent. Transylvania had long been a part of the Austro-Hungarian Empire but it too had endured a long period of Turkish domination and its culture was still largely medieval. The legend of the vampire was and still is deeply rooted in that region. There have always been vampire-like creatures in the mythologies of many cultures. However, the vampire, as he became known in Europe and hence America, largely originated in the Slavic and Greek lands of eastern Europe. A veritable epidemic of vampirism swept through eastern Europe beginning in the late seventeenth century and continuing through the eighteenth century. The number of reported cases of rose dramatically in the Hungary and the Balkans. From the Balkans the plague spread westward into Germany, Italy, France, England and Spain. Travellers returning from the Balkans brought with them tales of the undead, igniting an interest in the vampire that has continued to this day. Philosophers in the West began to study the phenomenon. It was during this period that Dom Augustin Calmet wrote his famous treatise on vampirism in Hungary. It was also during this period that authors and playwrights first began to explore the vampire myth. Stoker's novel was merely the culminating work of a long series of works that were inspired by the reports coming from the Balkans and Hungary. Given the history of the vampire myth in Europe it is perhaps natural that Stoker should place his great vampire in the heart of the region that gave birth to the myth. Once Stoker had determined on a locality Vlad Dracula would stand out as one of the most notorious rulers of the selected region. He was obscure enough that few would recognize the name and those who did would know him for his acts of brutal cruelty; Dracula was a natural candidate for vampirism. Why Stoker chose to relocate his vampire from Wallachia to the north of Transylvania remains a mystery. The vampire myth is still wide-spread in eastern Europe. Similarly the name of Dracula is still remembered in the Romanian oral tradition but that is the end of any connection between Dracula and the vampire myth in folklore. Outside of Stoker's novel the name of Dracula was never linked with the myth of the vampire. Despite his inhuman cruelty, in Romania Dracula is remembered as a national hero who resisted the Turkish conquerors and asserted Romanian national sovereignty against the powerful Hungarian kingdom.

Related VampireTest
Please SHARE
"We've Got The Spirit"
Bookmark Us, Add to Favoites and or Share. Thank you.

Bats in our Bat Cave
sitemap