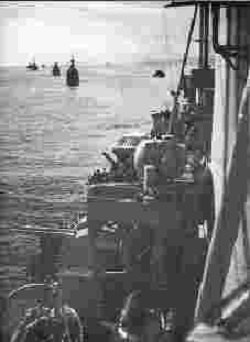 HMS Orion, Battle of Taranto, British World War 2 cruiser HMS Orion, The warning message HMS Orion,HMS Orion WW2, Guns HMS Orion, History HMS Orion Battle of Crete
HMS Orion, Mediterranean Sea 1942
During World War 2 the Mediterranean was busy with the clandestine operations of fleets of warships and aircraft, mostly operating secretly, engaged in the serious and frightening business of warfare. Yet amid this backdrop, an paranormal event on one ship stuck in the mind of a Royal Navy Seaman.

The Royal Navy inflicted a major setback upon the Italian Royal Navy during the Battle of Taranto on the night of 12/13 November. The devastation wrought by the British carrier-launched aircraft on the large Italian warships was the beginning of the ascendancy of naval aviation over the big guns of battleships. November 18th - Mediterranean Sea, North Of Libya The British World War 2 cruiser [b>HMS Orion was sailing through the Mediterranean north of Benghazi off the Libyan coastline on its way to Grand Harbour, Malta. It was part of a convoy of ships sailing from Alexandria that Wednesday and functioned as the main 'night screen' of the fleet, which is to say it was basically a lookout ship, an escort cruiser. The fleet, a part of Operation Stone Age had set sail that morning and by 5:25pm all seven thousand tons of HMS Orion was on 'sunset action stations' with its guns on standby.

During the Second World War, Operation Stone Age or Stoneage was the passage of MW13, the convoy of four merchant ships that reached Malta from Egypt on 20 November 1942 from Alexandria. Its arrival is considered to have broken the siege of that island.

A Royal Navy seaman, Tegwyn Hughes, was part of a nine-strong team of men in the transmitting station on the ship, which was a cramped room, a communications hub for passing intelligence from different sources to the gunners during active warfare. It was a quiet night.
With a noisy clang the Petty Officer left via the hatch at the top of a metal ladder and the men remaining settled down to relax at their stations. Tegwyn sat with his headphones on at a position almost directly beneath the hatch. In fact his shoulder rested on the ladder itself.
Shortly afterwards he heard the hatch above him slam open and the hiss of warm air escaping the confines of the transmitting station. He did not look up, used to people coming and going. He heard the hurried descent of boots on the ladder and then the clang of the hatch closing once more. The footsteps continued to descend and as they reached level with his head, Tegwyn looked around.
Nobody was there. A couple of his colleagues looked over to ask who it was who had come down, as they had heard the hatch open and close also, but Tegwyn, sensing urgency, had suddenly sprung to attention and cried out: 'All guns close up.' The team got to work, focused on the equipment, and he listened into the headset. He heard a faint voice over the radio silence, and asked for a repeat. 'Aircraft on the starboard bow' - 'Bearing green, four-zero.'

The Guns Of HMS Orion

Tegwyn issued a command to fire, wasting no time.
On the bridge the Lieutenant heard his instruction and despite the lack of alarms sounded and the fact that no orders had been issued prior to this, he fired.
The shells exploded amid a squadron of approaching Italian bombers. The blasts sent shockwaves over the aircraft, affecting their altitude as they dropped torpedoes.
Inside the transmitting station the officers then heard the approaching whine of a torpedo, which rose to a crescendo before fading a little - it had passed beneath the ship. Another torpedo passed the bow, only fractionally missing the ship. Within seconds an explosion ripped through the night. An accompanying ship, HMS Arethusa, had been struck. The Orion had come incredibly close to being hit, and but for the warning which Tegwyn heard and his instructions following this message, the ship might well have been destroyed. 'Some experiences are so powerful, so meaningful, you never forget. I've not talked about it much because it may be too unusual an experience for people to accept. But it's as vivid in my mind today as the day it happened, and it hasn't changed over the years.' Tegwyn Hughes

1941 May 29th. In the Battle of Crete the year before, HMS Orion had been struck during warfare and as part of the damage sustained during the evacuation of Allied troops from Heraklion on one occasion the transmitting station hatch had been practically sealed due to bomb and fire damage. Beneath the station the fuel tanks had been ruptured and the men imprisoned inside had perished due to the fumes. The officers on board in November 1942 on the way to Malta included some from that battle, and so the fate of the transmitting station officers in 1941 was known among the men.

The warning message HMS Orion which Tegwyn heard did not come from the masthead lookout since he used a different telephone circuit, nor did it come from the officer in charge of the guns as he would not have spoken of the approaching aircraft but would have simply issued orders to be passed via the transmitting station to the gunners. Plus Tegwyn testified that the voice he heard was not that officer. In fact Tegwyn never found out the source of the voice. But the warning message HMS Orion was heard. Nobody saw anything. The men of the transmitting station heard the hatch open and the sound of boots on the metal ladder. And Tegwyn heard the warning on his headphones. Was the voice that of a former naval seaman who had perished the year before in those exact cramped quarters? Was he trying to prevent a similar fate for his comrades? Tegwyn Hughes related this story to Jeffrey Iverson in the autumn of 1990, but died at Easter in 1991. This tale is related in Iverson's book 'In Search Of The Dead' and on the accompanying television series. Royal Marine Fred Brindley HMS Orion WW2

Harold Shipman Prolific Serial Killer ***** Psychopaths Have Feelings: Can They Learn How To Use Them *****