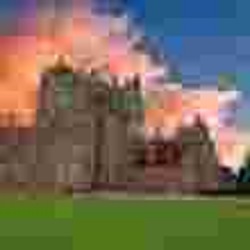 Glamis Castle is located in Scotland. Castle Road, Forfar DD8 1RJ. It is open to the public and is the home of the Earl and Countess of Strathmore and Kinghorne. Glamis Castle is strath or a vale. It has a flat wide river valley with low-lying grassland along it. A valley, coursed by a stream. Ominous Glamis castle walls are 15 feet thick. It is said that the room holds a monstrous ghosts.
Ominous Castle

Glamis Castle The name Glamis comes from the Gaelic word glamhus meaning a strath or a vale. In 1424, the Lyon family became the owner of Glamis. The family name became Bowes-Lyon when the ninth Earl married a Yorkshire heiress. The castle is just five miles south of the town of Forfar in the vale of Strathmore, in the north-east of Scotland. From its origin as a keep, the castle has been extended and strengthened until, in some parts, the walls are 15 feet thick. This gives credence to the existence of a secret chamber hidden somewhere in the castle. This secret chamber is said to hold a secret said to be known to only certain members of the British Royal Family. In 1904, Claude Bowes-Lyon, the 13th Earl of Glamis, told an inquisitive friend, If you could only know the nature of the terrible secret, you would go down on your knees and thank God that it were not yours. Once when the daughter of the 14th Earl of Glamis asked what the secret was, her father told her, You cannot be told; for no woman can know the secret of Glamis Castle. It is said that only certain male members of the Royal Family were told of the secret on their 18th birthday, but none of them has ever commented on or denied the secret of Glamis Castle. Of course, this does not mean the general populace is immune from speculation about it. One story in circulation says that the room holds a monster. The Secret Glamis Castle Hidden Chamber In 1821, the first son of the 11th Earl is said to have been born horribly deformed. Its body is said to be egg-shaped with tiny arms and legs with no neck. The official version says that this child died just a few days after birth. Rumors say that this unfortunate infant was locked up in a secret room in the castle. Somehow, despite its deformity, the child survived. In time, a second son was born. When the second son reached the age of eighteen, he was told about his elder brother. He, in turn, told his male heir and the tradition was passed on down the generations. There is a section of the castle ramparts called the Mad Earls Walk which is said to be where the deformed Earl was taken out for exercise. There is also an old oil painting in the castle which shows a strange green-clad figure of a child with a strangely-deformed torso. The identity of the paintings subject, however, had never been established. Locating Glamis Castle Secret Chamber Glamis Castle, as is common with structures of this kind, has got many windows. Once, a party of visitors to the castle decided to use the windows as a means of locating the secret chamber. Theoretically, a window seen from inside the castle should also be seen from outside the castle. So they went all over inside the castle and hung a towel from every window they could find. Then they went outside the castle to check on their handiwork. True enough, there was a window seen from outside the castle which did not have a towel hanging from it. Phase one of operation Secret Chamber accomplished successfully. However, phase two, actually locating the secret chamber from inside the castle, was aborted with indeterminate results. Try as they might, they could not find the entrance to the secret chamber from inside the castle. The vague conclusion was that the secret chamber should be somewhere in the old square tower. Perhaps someday, high-tech equipment, which had been used to locate the pharaohs tomb deep inside the pyramid, might be used to locate this elusive secret of Glamis Castle. In the meantime, visitors to the castle will have to be content with other less elusive phantoms. One such apparition is known as Jack the Runner. The Ghost of Jack the Runner In the 17th century,

The Earls of Glamis

Are said to have added a gruesome aspect to the sport of hunting. A black slave was stripped naked. Then hunting dogs were set after him. The slave was repeatedly impaled with lances while the dogs literally tore him to pieces. It is said that the ladies of the castle watching from the ramparts laughed in merriment at this ghastly spectacle. The murdered slaves ghost has been sighted darting about the castle grounds, screaming in agony. The Haunting of the Silenced Maiden There is another ghost from a gory incident around that time. It is said that it is the ghost of a young maiden from the nearby village. She is said to have been engaged in illicit relations with one of the Earls. Then one day, she stumbled upon the secret chamber. Whatever she saw inside must have been terribly horrifying for she ran screaming from the castle. She was later captured by two Royal henchmen. One of them took a pair of iron tongs. He ripped out the young maidens tongue and threw it into the fire. This is apparently a standard procedure called the ritual of silencing. In normal circumstances, the victim would have either died of shock or of bleeding. However, in this particular case, the mutilated maiden ran out of the castle dungeon without her tongue with blood spurting from her mouth. The henchmen went after her. One of them caught her. He held her in a headlock and twisted her head until her neck broke. Then they meticulously sawed up her body and fed the severed parts to the wild boars in the forest. Her mutilated maiden ghost has been sighted running around the castle grounds with silent screams issuing from her mutilated bloody mouth.

Just the possibility of coming across these two apparitions should put the Scotland tourist attraction Glamis Castle at the top of the list of any avid paranormal researcher’s itinerary. The tourist attraction covers more than 14,000 acres. Two streams, one of which is the Glamis Burn, run through the estate. There is an arboretum overlooking the Glamis Burn, with trees from all over the world. Many of these trees are rare and several hundred years old. The vicinity of Glamis itself has relics from prehistoric times. There is an intricately carved Pictish stone known as the Eassie Stone found in a creek-bed at the nearby village of Eassie. In 1034 AD King Malcom II was mortally wounded in a battle nearby and was taken to the Royal Hunting Lodge where he died. This lodge is on the site of the present castle. From 1372 onwards, Glamis Castle had been the home of the Lords of Glamis who are now the Earls of Strathmore and Kinghorne. Shakespeares famous play Macbeth was set in this castle although the historical King Duncan was actually killed near Elgin. While the fictitious Macbeth struggles with the ghost which haunts the castle in the play, other specters roam within its walls in real life.

White Lady of Lady of Glamis

A prominent Edinburgh lawyer also had brush with a being from the other realm near Glamis Castle. He had been invited, together with some friends, to have dinner at the castle. As they drove into the castle grounds, they saw the shadowy figure of a woman dressed in white. Surprisingly, she went along so swiftly that she could keep up with their car, right up to the castle doors. Then she disappeared. Initially, they thought that it was just one of the maids out for an evening walk. Then they were told that all the maids were inside the castle that night and all were accounted for. Thinking back about it, considering that the woman looked so strange and was able to move so swiftly as to keep up with his moving car, the lawyer concluded that he had just had a close encounter of the other worldly kind. This apparition is said to be the ghost of the Lady of Glamis who became Lady Campbell after her husband’s demise. King James V concocted a charge of witchcraft against her. She was a very beautiful and popular lady with an impeccable character. Nevertheless she was imprisoned. She was kept so long in the dark dungeon that she became nearly blind. Then she was burned alive at the stake outside Edinburgh Castle. Her ghost, known as the White Lady, had been sighted at Glamis Castle for hundreds of years. The chances are good that present-day visitors to the Glamis Castle in Scotland may still have to chance to come across the White Lady while they are trying to locate the hidden chamber. Silenced Maiden Ghost