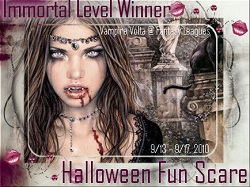 "What happened? You alright?"

Shardin simply ignored them and struggled to his feet, picking up Kenda’s sobbing form and carrying her to the main room. He placed her in a chair before falling back into a chair of his own and collapsing from exhaustion and fright. Eventually, Kenda managed to halt her tears and weakly scramble out of her chair, oblivious to the little knot of people standing in the doorway. She crawled to Shardin’s chair and wrapped her arms about his legs, firmly convinced that he had saved her life by dragging her inside with him. It was there that she was finally taken in unconsciousness by her intense fatigue, the sounds of the shadow beasts following her into sleep, as they would haunt her throughout the rest of her life.

Lit in memory of those lost due to corona virus pandemic.